When the United Nations released a report earlier this year that a catastrophic two-degree Celsius (3.6-degree Fahrenheit) rise in global average temperatures is expected to occur in the next decade, there was a media firestorm about the dire predictions. You know who wasn’t surprised? Climate scientists. (Read about the difference a half-a-degree can make.)

EIT Climate-KIC is a pan-European public-private partnership supported by the EIT (European Institute for Innovation and Technology). EIT Climate-KIC is a network of communities working together on projects, innovating to solve for the challenges presented by climate change mitigation and adaptation. They have a large network of people working on various projects across the entire spectrum of climate innovation. They’re already seeing the impact their organization can have on changing systemic ways of thinking.

Visualizing the Resources in a Climate Science Network

The Director of Community Management, Michelle Zucker, wanted to be able to tell EIT Climate-KIC’s story by visualizing their network and by visualizing all the work being poured into climate change. Zucker connected with Exaptive. Exaptive is the data analytics company that built the Cognitive City platform to bring together people, data, and analysis tools. The idea is that great innovations require unconventional thinking, and often happen serendipitously. The Cognitive City facilitates innovation, making productive connections less spontaneous and more intentional.

Exaptive worked with Climate-KIC to create their own Cognitive City for the Climate Innovation Summit 2018: Mission Finance. Exaptive Director of Business Development, Shannan Callies, and data scientist Austin Schwinn joined Michelle in Dublin in November for the conference. EIT Climate-KIC gathered data on what had been accomplished in 2018, including work by partner organizations as well. It’s the work of people who are focused on making real change through multiple projects.

Finding Impact in a Busy Network

The Exaptive team added the information to the Cognitive City platform. The highest-level view is impressive for demonstrating the sheer number of people working together to solve a grand challenge. The first time she saw the full network map, Michelle said, “It's amazing to see how many people and institutions and projects are happening on the ground today!”

They’re not only interested in seeing how the people collect around issues, but how the funding collects around issues as well. A lot of innovation funding understandably goes into technology, but there are many levers that affect climate change which have room for innovation. EIT Climate-KIC is currently focusing on these Levers of Change:

With EIT Climate-KIC’s Cognitive City, it’s easy to see which projects are connected to each Lever of Change. You can also see which Impact Goals (more on those in just a second) are connected to those projects. Another layer of visibility includes the people connected to all those projects. “Being able to visualize the people, projects and how they are all connected is critical for us. That’s because we need interdisciplinary scientists and stakeholders to solve the highly complex challenges associated with climate change,” Michelle noted.

Using the Network Map to Visualize Areas of Focus

To drive action toward areas where we can make an impact, EIT Climate-KIC has developed a “theory of change.” Michelle explained it best this way, “We asked the question, ‘What is the future we want to be a part of creating?’ Then we worked backwards from there."

One of the features of their Theory of Change is a collection of 12 Impact Goals broken down into four areas -- or themes -- including sustainable land use, urban transitions, sustainable production systems, and decision metric finance. 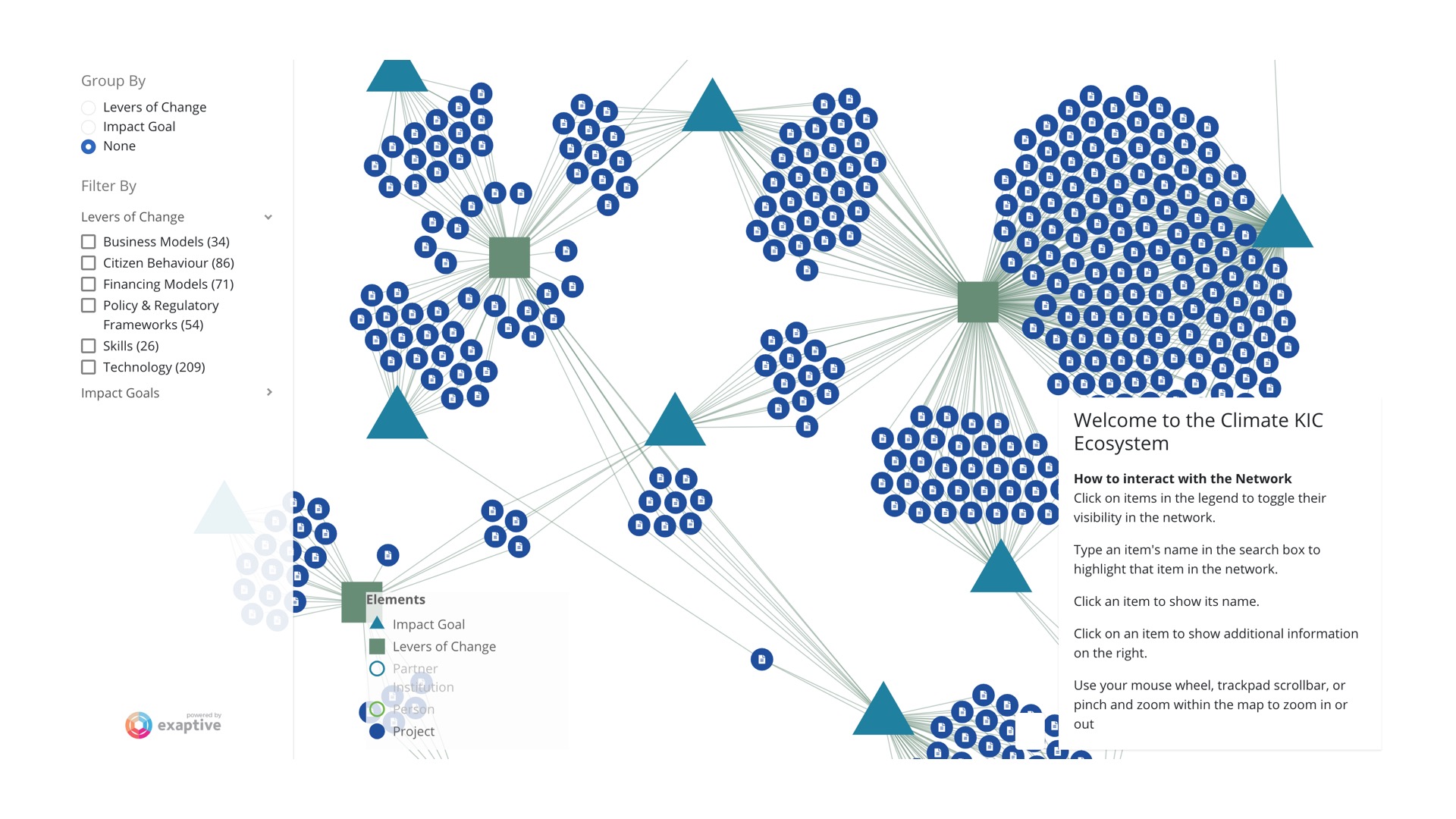 The conference in Dublin addressed Mission Finance specifically, but EIT Climate-KIC’s ongoing mission addresses all the levers that affect climate change. With a new ability to see all the resources available across their community, there is a new way to create collaborations that could have real impact.