Ever work in a place where you looked up to everyone there because they are experts at whatever they do and can pretty much solve any problem that arises? That’s what working at Exaptive is like. It’s a mix of expertise across various computer/data fields that works very well. Ever felt like you didn’t belong in a place like this?

It’s hard to work for a small software company and see everyone wearing multiple hats but see that you just have one that fits and doesn’t feel quite as important: designer. This can be internalized negatively by thinking you HAVE to learn something you may or may not be capable of to carry your weight. My first instinct was, “Well, I’m going to learn javascript so I can be more useful.” It’s been four years. I still know just enough javascript to be dangerous.

So what happened? There is a scene in the Matrix when the Oracle gives Neo a cookie, she asks him what a sign above the door says… Temet Nosce (know thyself). Was I hired to write code? Nope. Was I hired to design all the things? You know it. So why would this place want me doing design work for them? It took me a bit to come to this conclusion, but it’s because I am an expert. My grandma thinks I am an expert. She also thinks I hung the moon so I don’t think I can trust her completely. Coworkers? Yep. The boss? Yep. Sometimes others can see what is in us better than we can ourselves because we get blinded by our own perceived flaws or shortcomings.

Is all of this from a lack of confidence? I don’t really think so. I know what I can do. For me, it came from not always seeing how what I was doing is leading to better outcomes for our clients or helping the sales team put its best foot forward. Recently, we launched a new version of the website and I have started to better consolidate our collateral designs into a cohesive set of messages (thanks to Shannan, Jill, and Mike) to go along with a slew of conference appearances. The result has been hearing first hand how design has an impact, which in turn makes me feel like I am doing my part to help (without all of that pesky coding). Achievement Unlocked.

The bottom line is that if you look around and see a lot of great people in your organization and have self-doubt, don’t. Any place that will hire only the best considers you to be exactly that. Go own it.

Jill and I are going to embark on learning javascript or die trying.

Every year in July, Exaptive celebrates surviving another trip around the sun. When we reach major milestones, I make a poster for it. Here’s a look back at some of the milestones we’ve celebrated in the last few years: 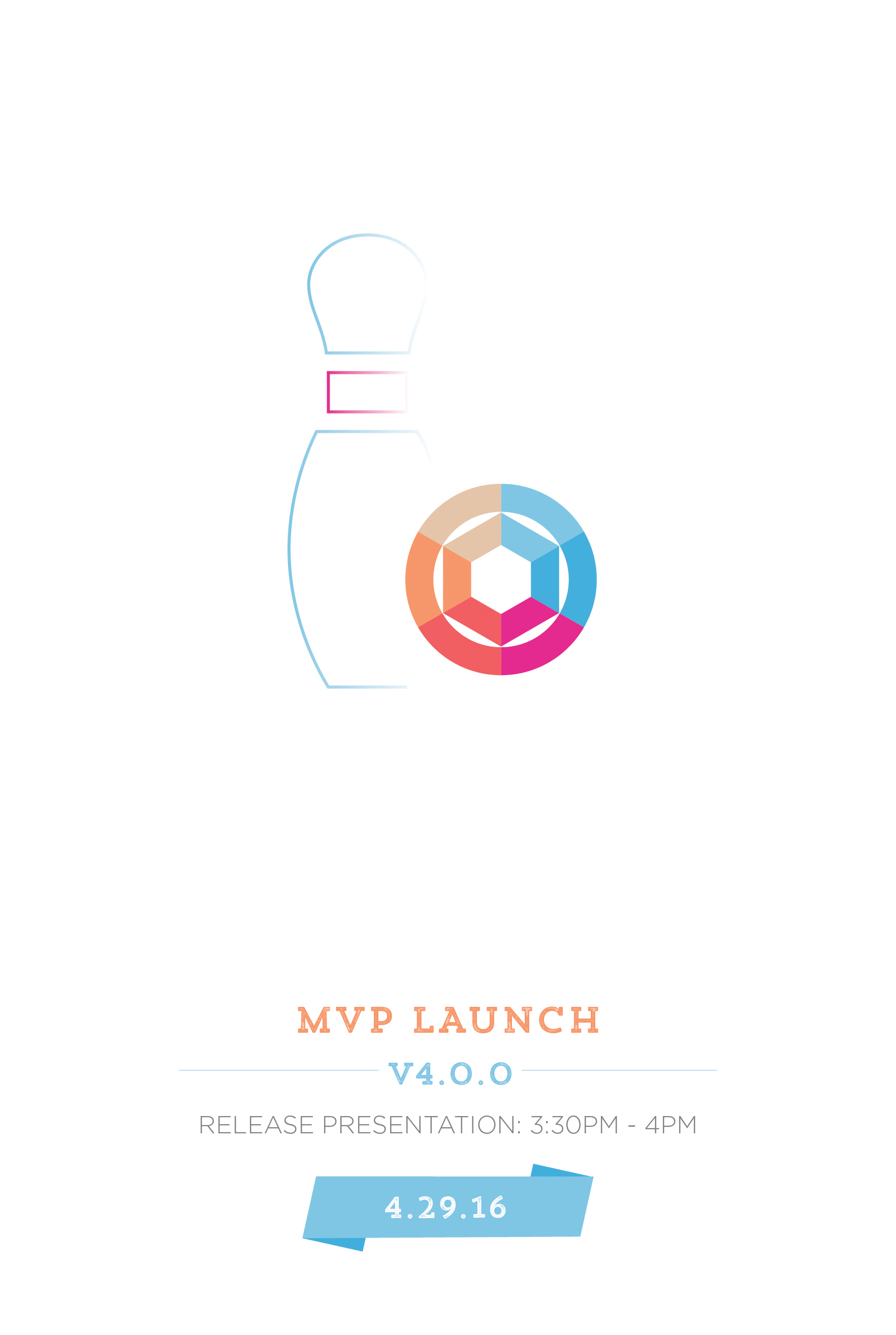 My perspective: We celebrated the Studio MVP (minimum viable product) launch with bowling.

CEO Dave King's perspective: The first milestone poster Derek ever made was this one, in April 2016, but the idea for it far predates that. In the summer of 2011 I was living in India with my wife, Deonnie Moodie, who was wrapping up her dissertation research for what would become a book about Kalighat Temple. I had quit my previous job in order to mull over the idea of starting Exaptive. Walter Isaacson's biography of Steve Jobs had recently come out and it included an anecdote about Jobs that I hadn't previously heard - that he had the early Macintosh team's signatures etched into the tooling that made the Macintosh case so that they had all "signed their work". I had my own background in art, having spent time as a fine-art photographer,  so I knew the feeling of accomplishment that came with putting your name on a creation you had put out in the world. Job's team had built a hardware device, which gave them a convenient canvas to sign. My team was producing software so I needed Derek to create a canvas for us. That's exactly what he did with this first poster. We printed it out nice and big, had the whole team sign it, and hung it on the wall. More importantly, next to the signed milestone poster we also hung a long row of empty frames - motivating the team to push towards the next release. 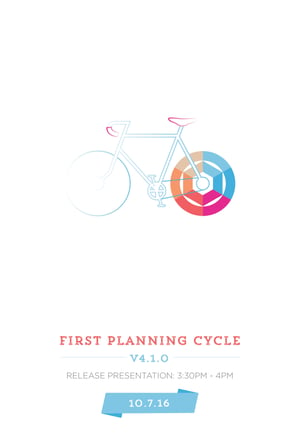 My perspective: We were recognizing some important improvements to our agile development process.

Dave's perspective: Exaptive was growing quickly in 2016, demand for our product had increased, we had hired more people, and we were experiencing growing pains. We needed to scale our processes. By Q3 of that year we had implemented a number of improvements to our agile process that allowed us to map our work onto goals much larger than individual 'sprints' . We called these larger work units  'planning cycles'. I wanted to have a milestone poster that celebrated the team's ability to build a process, not just a product. 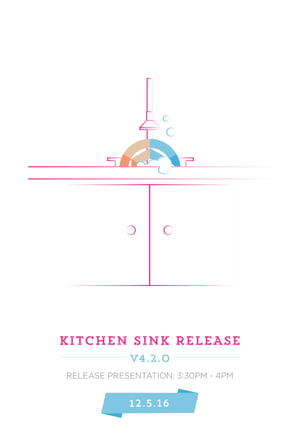 My perspective: So-named because of the variety of Studio features that were packed into this release.

Dave's perspective: As our processes improved, so did our bandwidth. The team was excited to tie up loose ends, clean up technical debt, and crank out a bunch of small but high-value features. When people signed the Kitchen Sink Release poster there was a lot of "I can't believe we fit all that in!" We had also set up the engineering infrastructure to support continuous delivery and automated deployments - an engineering and devops accomplishment that changed our mindset, dramatically improved our productivity, and took our game to the next level. 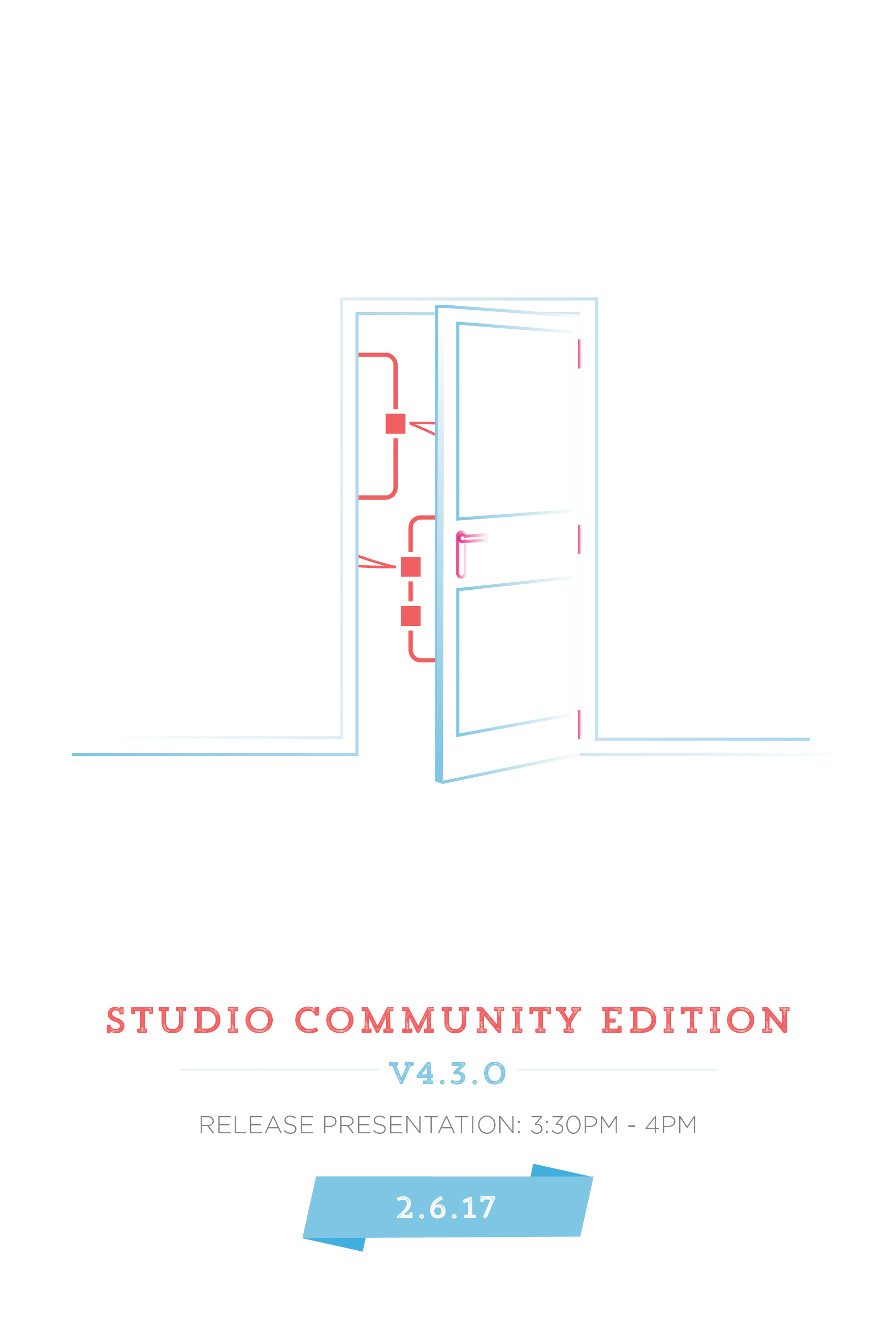 My perspective: We launched a community edition to the Studio.

Dave's perspective: We had been selling the Studio for a number of years but hadn't made a free version that was open to the public. Since the whole goal of Exaptive is to facilitate innovation, we knew that it was going to be critical to allow more users to be able to work with our tools at lower price points. The Community version of the Studio was our first experiment with this, and it's still available for people to use today. 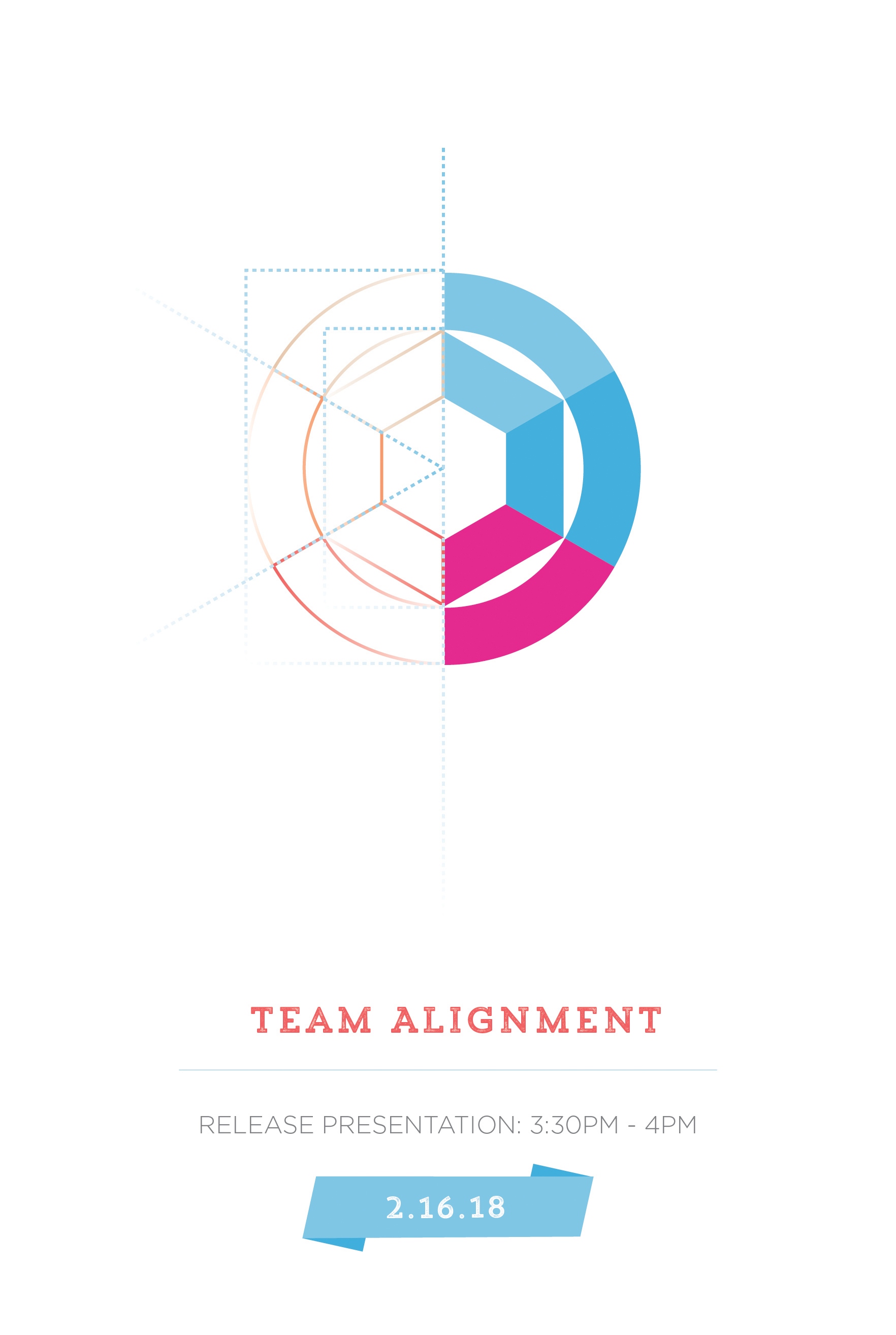 My perspective: The company re-aligned around how the various teams intertwined to make the whole.

Dave's perspective: A year later, the company had continued to grow. We had released many more versions of our software and we had set up new teams devoted to support and training and customer feedback. We started to see our own silos emerging within even our still relatively small organization. Individual teams were being efficient and effective, but it was increasingly easy for those individual teams to lose sight of how their work had to all connect to a common set of goals. It was time for another process optimization that got all of our teams in alignment. 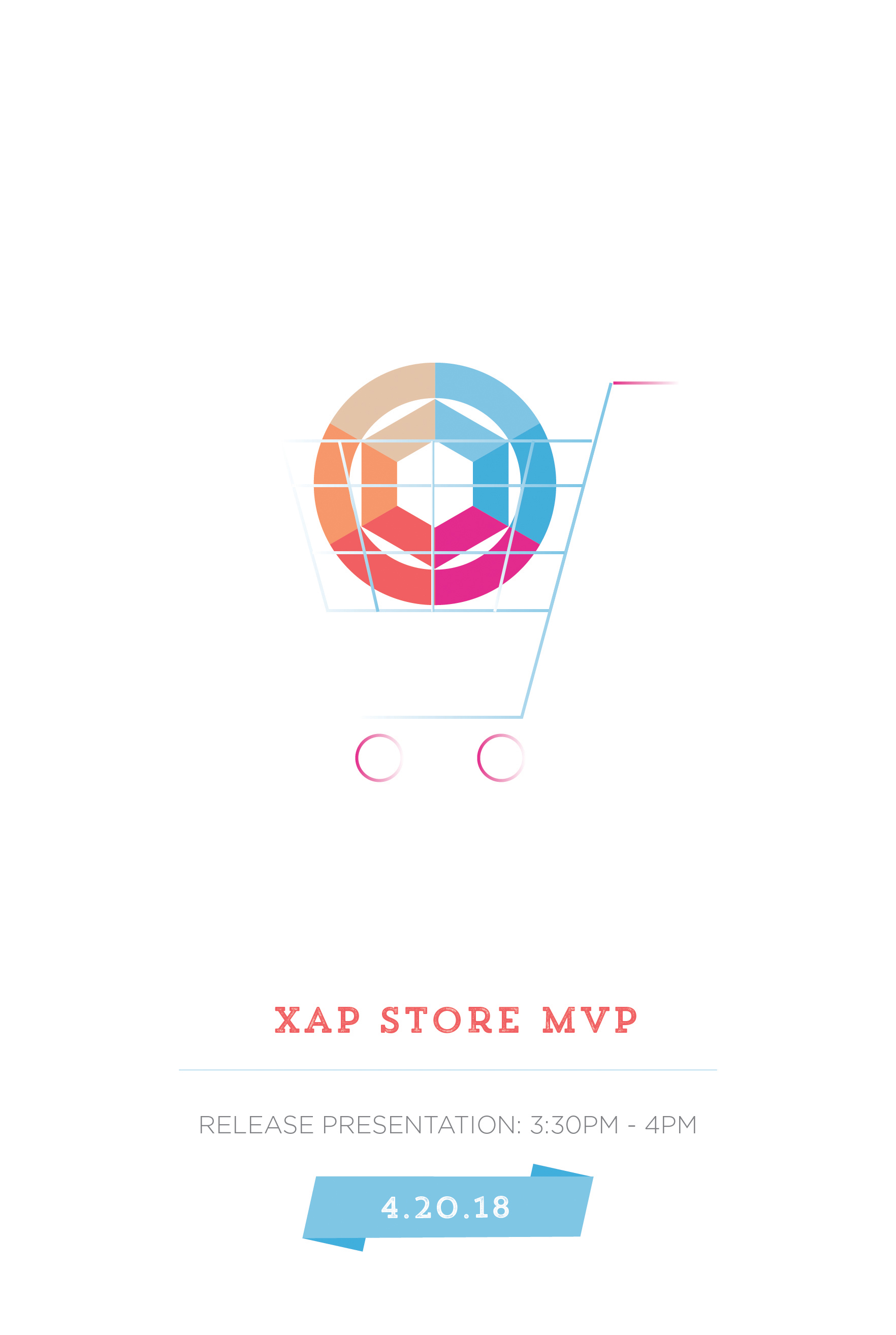 My perspective: We released the long awaited xap store infrastructure.

Dave's perspective: The vision of the Studio was to not only allow people to build data-science applications more easily, but to allow them to distribute the "data applications" they had made. We wanted to be able to embrace open-source, free sharing, but we also wanted to support entrepreneurs that needed to monetize their work in order to achieve sustainability. I have often felt like the closed-source/open-source debate is a false divide. Both models are symptoms of a larger problem. The Xap Store was an opportunity to experiment with building platforms that could support a mixture of the two. 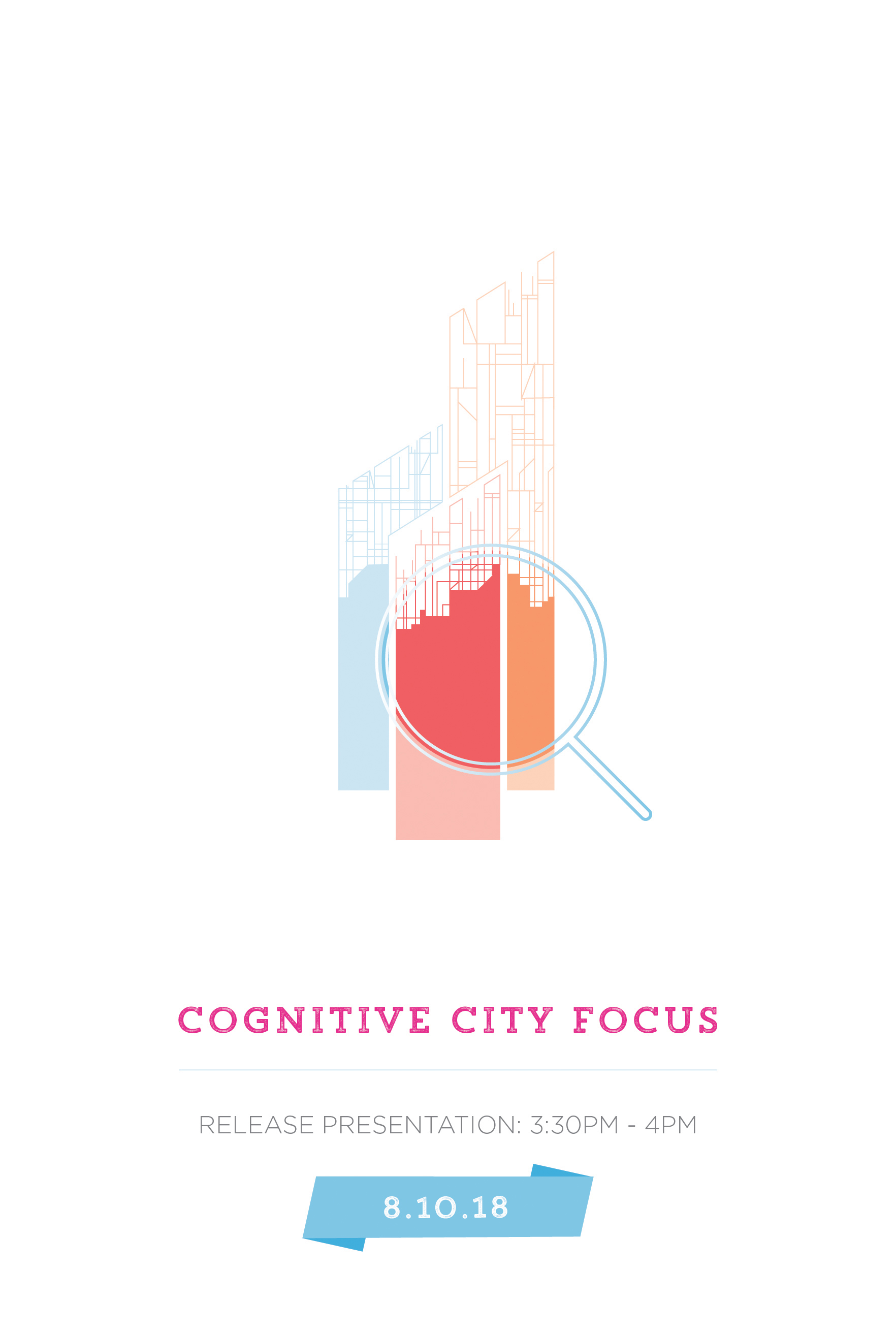 My perspective: We were recognizing the company shift towards Cognitive City development.

Dave's perspective: We had started Exaptive with a focus on lowering the barriers to data-science with the Exaptive Studio, but always with the fundamental mission of facilitating cross-disciplinary exaptations. (See more of Derek's graphic design work in the form of amazing hybrid 'exaptation images' he developed to showcase famous historical exaptations.) We saw the potential to facilitate innovation with more personas than just data scientists, so we started productization of the Cognitive City platform in order to drive meaningful collaboration across all divisions of an organization, foundation, or consortium. 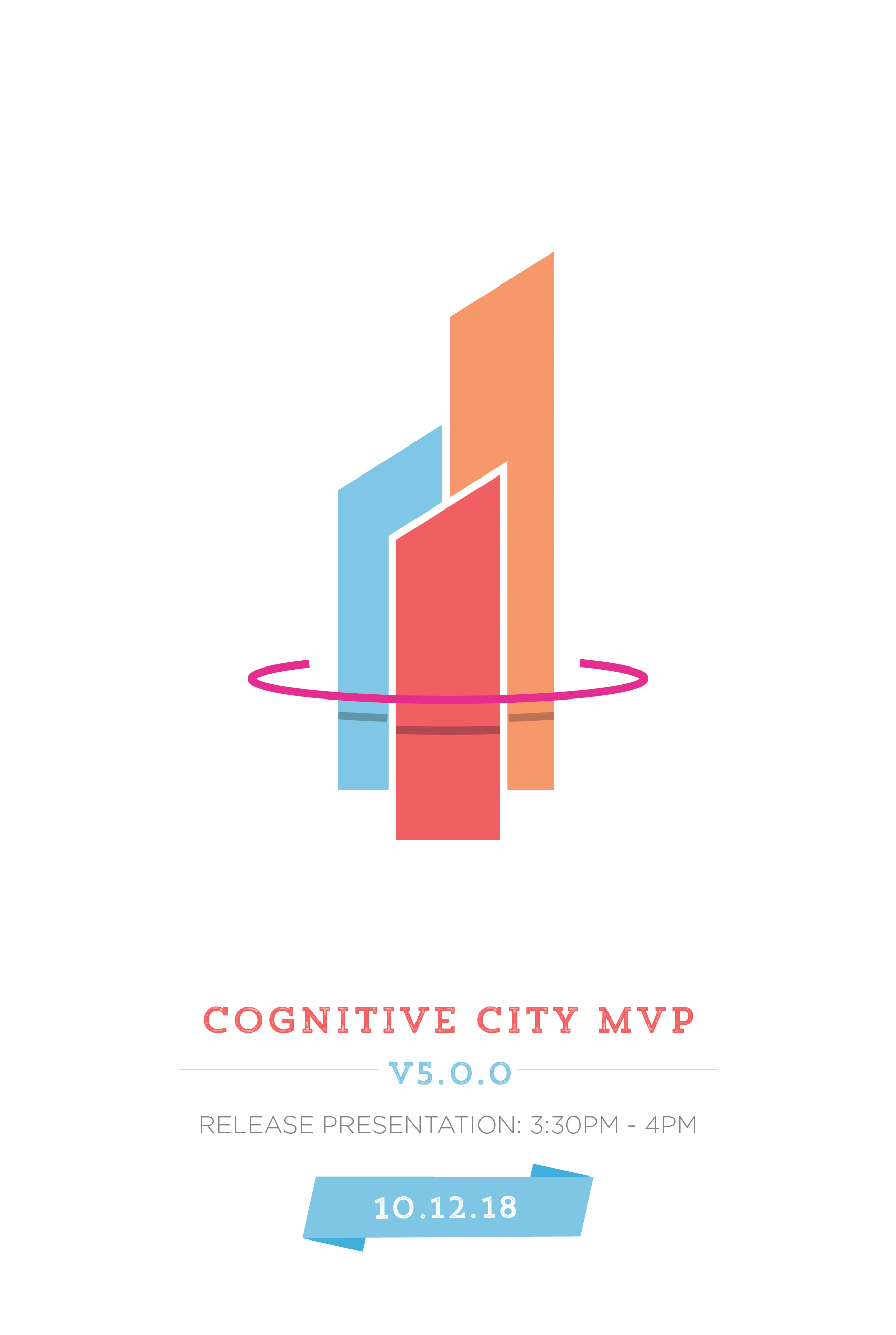 My perspective: This was the first release of Cognitive City base functionality.

Dave's perspective: Our wall of milestone posters had been filled in - there were no more empty frames. So, obviously, it was time to move offices. The Midtown Renaissance team was renovating a great building in OKC's new Innovation District. That seemed like the perfect place for a company trying to facilitate innovation. We moved into the new space early this year and found a suitable wall for the milestone posters. Derek's designs continued to give people both motivation and satisfaction as we started adding features to the Cognitive City. 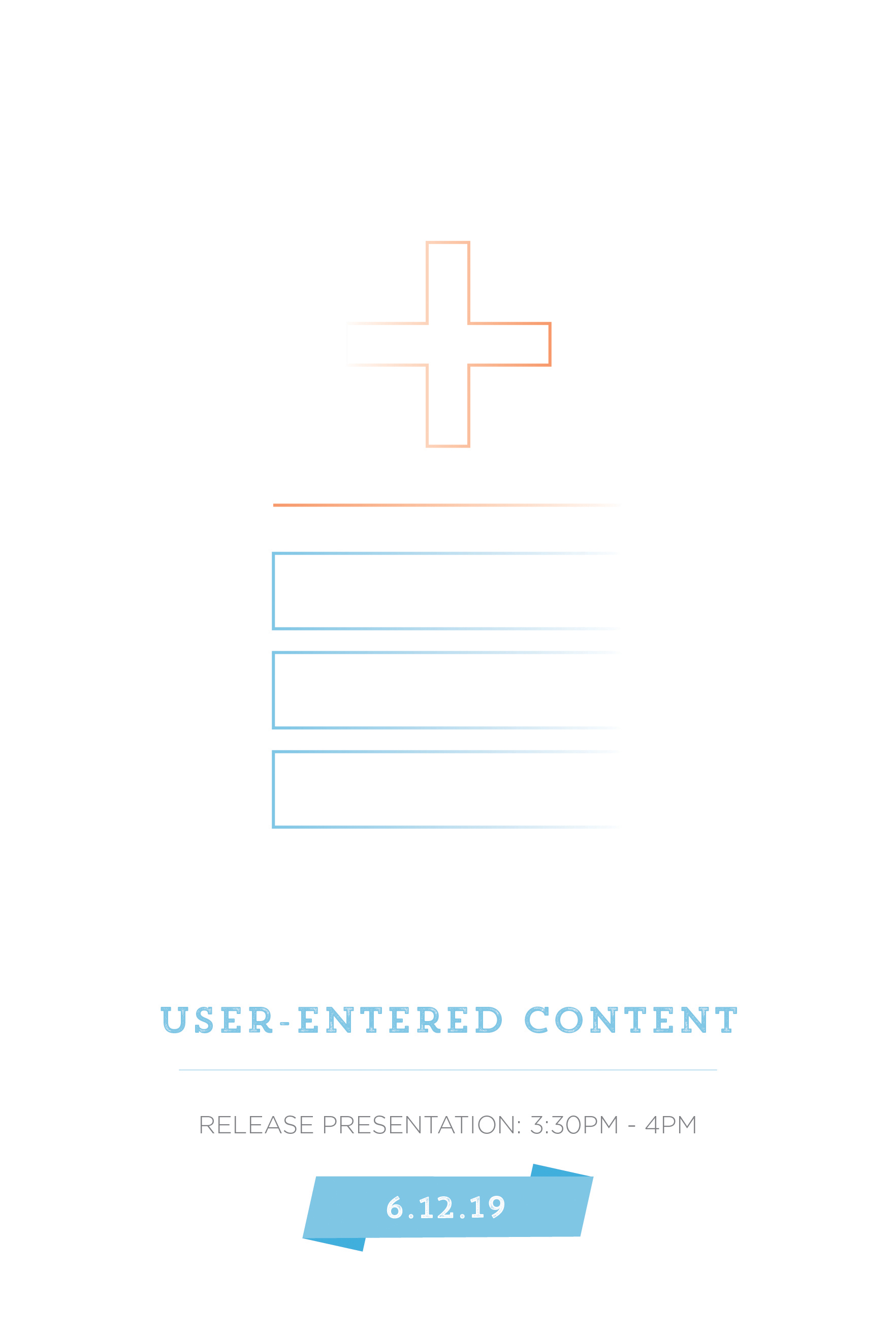 My perspective: We released functionality that allows users to populate the city with their own data.

Dave's perspective: There is a great line in Clay Shirky's book Here Comes Everybody in which he talks about the important difference between technologies that are 'televisions' instead of 'telephones'. Too much of our technology is designed for passive consumption instead of active conversation. Ideas are networks, the lone-genius is a myth, and the Cognitive City had to make it really easy for users to enter content if it was going to democratize innovation. 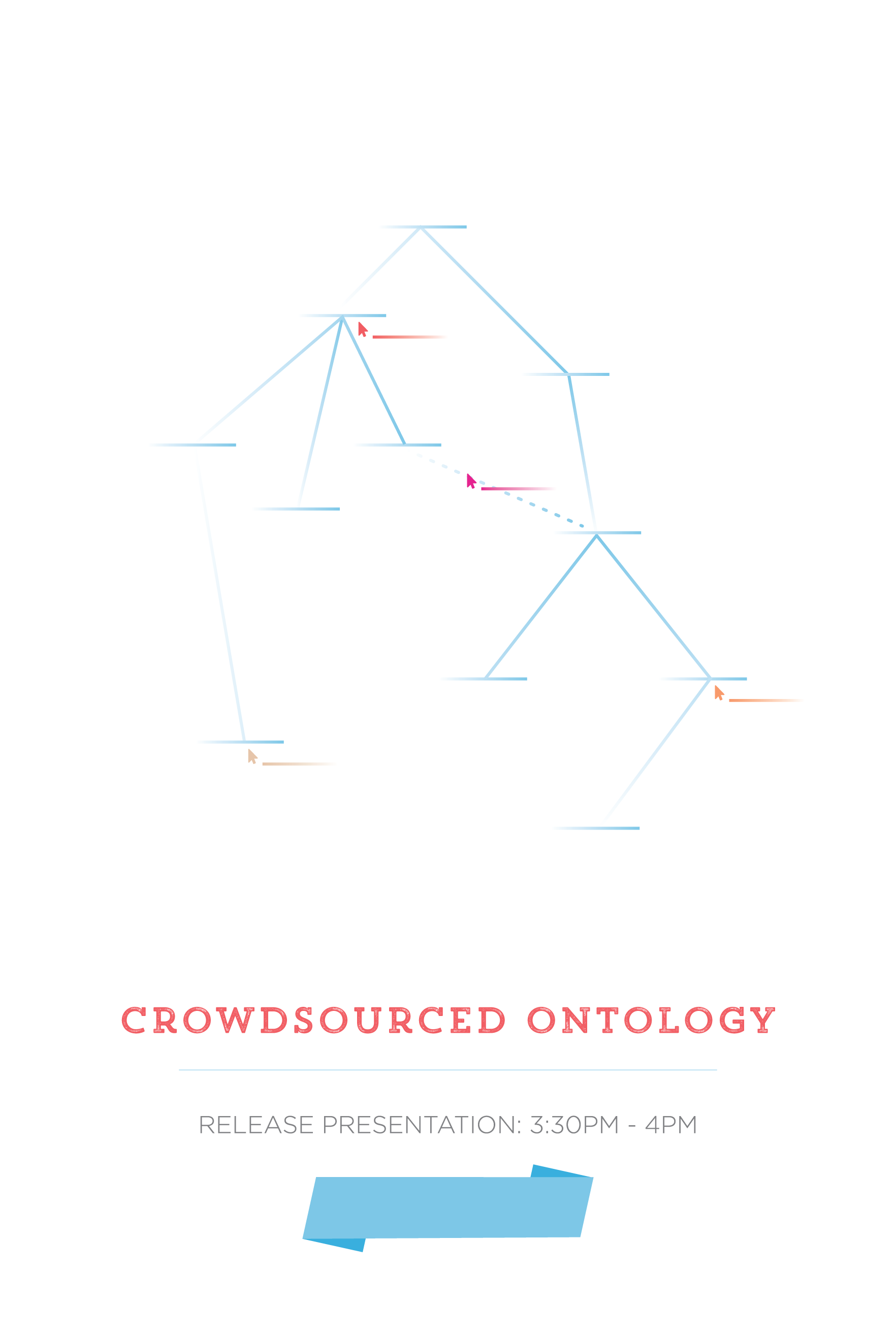 My perspective: The next milestone poster the team is working toward.

Dave's perspective: I'm trained as an engineer and engineering is all about tradeoffs. Every solution has problems, so I tend to judge solutions based on whether they introduce the types of problems I think are worth dealing with next. Building systems that democratize innovation lead to a huge set of worthy problems. The easier you make it for users to enter content, the messier your data become. If you try to get everyone to agree on a single "ontology" before you start, my experience is that the project never gets off the ground. So what we're working on right now is trying to simultaneously make it easy for the community to enter data and to clean it up at the same time. This release poster doesn't have a date yet because it's still a work in progress. But the team is almost there - they are excited to sign their names to this one and get it on the wall. When they do, I'll be excited to blog about it!