People sometimes ask me what our company’s name means and why we chose it. The explanation often leads to discussions about similar but different terms. So I thought I’d use this blog post to explain, hopefully illuminate and while I’m at it, to correct some usage that’s bugged me for some time. Actually, let’s start right there.

I'm not sure where accuracy becomes pedantry, but there are two words - catalyst and crescendo - that instantly make my ears prick up when I hear them, only because I've heard them used incorrectly for long. One is from science and one from music, two things I tend to obsess about.

Talking of initiators, here's one that really gets me going. People talk about a crescendo, "Things really reached a crescendo," as if it is the peak of activity. It is not. A crescendo is the process of getting louder. It is not the loudest part at the end. It is only the part during which things get louder. "Reaching a crescendo" is actually reaching the part where things start to get louder, meaning that things are not as loud as they will be after the crescendo. So the phrase actually means the opposite (quieter) of the intended meaning (loudest). 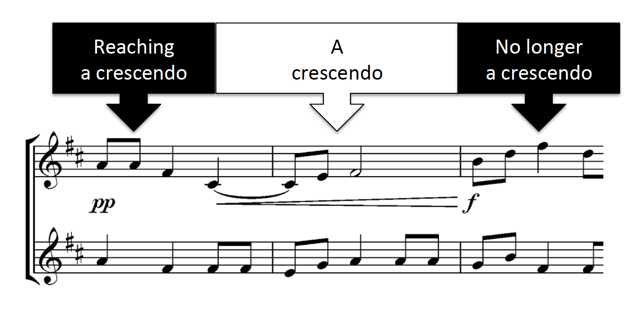 So why is crescendo so misused? Well, it might have something to do with the musical term that actually describes the moment of greatest intensity. That word is climax. A Google Images search for both crescendo and climax will help you understand current use and abuse. But there are some musical climaxes that are truly awe-inspiring (or awesome, but there's a whole TED Talk on usage of that word) like the end of Mahler's Symphony #2 or in Respighi’s Pines of Rome, or at the end of Ravel's Bolero, which was so fittingly co-opted in the movie '10'.

But I digress, or perhaps not. Because co-opting is crucial to where Exaptive got its name, from exaptation.

So why choose Exaptive as a name? Because we believe in the power of cognitive exaptation as a means to foster innovation. Much has been written on the myth of the lone genius, and we agree (that it’s a myth). So much in fact, that we formed a whole business around it.

Exaptive is an initiator, not a catalyst. Our platform connects people with other people, algorithms and data sources that they may not have not known about. And we change as a result, because these new connections yield new components and Xaps that get fed into the Store for sharing or purchase by others. The Exaptive ecosystem also changes because new metadata is created that can initiate new reactions.

This process of facilitating innovation, enabling new connections and yielding discoveries along the way will grow the platform, the community, the ecosystem. And it will grow like, well, a crescendo. And what we hope to facilitate is the series of cognitive crescendos and diminuendos that data scientists, researchers, and analysts go through as they navigate data, apply analysis techniques, bring in new data, and achieve insight.