So many fantastic quotes are attributed to Albert Einstein. If you hear our CEO Dave King speak, he may bring up his favorite: “Combinatory play seems to be the essential feature in productive thought.” To have an aha moment, we have to play with a challenge from a variety of perspectives. We have to build collaborative teams to tackle complex problems.

Figuring out how to build the team with the greatest chance for success can be complicated. Ideal innovation partners may be isolated geographically, in different time zones, or just not aware of the skills their coworkers can bring to a project. At Exaptive, our main goal is to facilitate innovation. We use sophisticated technology to help groups assemble research teams for collaboration, and we've found we can demonstrate the concept on paper. Cue the choir as the gates open to Exaptive’s Cognitive City!

The Challenge: Explain a Complex Concept in a Simple, Meaningful Way 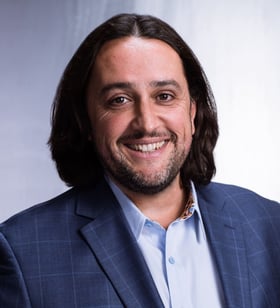 The teams at Exaptive have made a wonderful, seemingly magical tool (it’s science), and explaining the concept has been a challenge at times. Our CEO Dave King is excellent at presenting and explaining Cognitive Cities, but sometimes it takes a full hour to give an audience the context needed to end with a complete understanding. My favorite Einstein quote is: “Everything should be made as simple as possible, but not simpler.”

I become a little verbose myself when I’m explaining the vision of a Cognitive City. Exaptive’s Cognitive City is a tool that works for a community gathered around a specific issue, making it easy for them to collaborate. Sometimes the problem a Cognitive City solves is helping scientists visualize their own networks so they can find the right researcher to ask a question or include in a process. Sometimes the problem it solves is making suggestions for collaborative groups based on work individual scientists have done before. A problem the Cognitive City can also address is supplying tools for developers to make xaps (applications built with Exaptive tools) that are customized to answer questions researchers on their team want to ask of collected data. It’s a huge, powerful, intricate innovation machine! And it’s got algorithms and beautiful renderings of data and networks! And it’s…! Just hard to convey the elegance of the solution properly sometimes.

We Welcome the Challenge 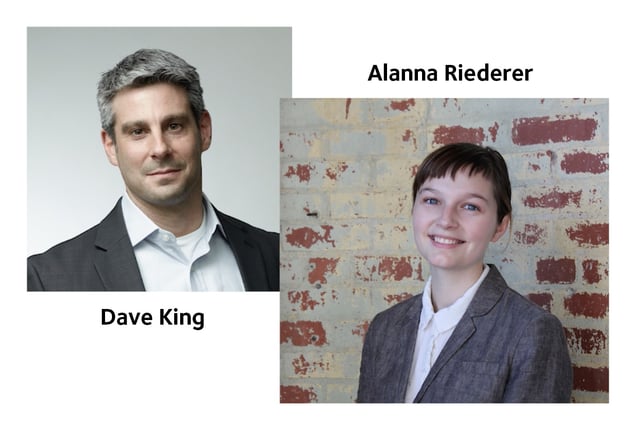 We knew from demonstrating the power of a Cognitive City to audiences in the past that people understand much more quickly when there is a show and tell. When Dave and Exaptive developer and data scientist Alanna Reiderer were invited to speak to the American Fidelity Women In Tech group in Oklahoma City, Alanna says, “The first thing we knew was that we wanted to do an activity. We knew we wanted to get people to connect. We needed to build a Cognitive City without having an actual Cognitive City. I needed a way to show the general idea of what the Cognitive City was doing, but in a very condensed way. And also in a way that wouldn’t require computers.”

After initially developing a form for attendees to fill out, Alanna realized it was getting to be kind of long. The goal was to glean enough information about the audience to help them make meaningful connections, but not overwhelm them or make the exercise take a long time. Dave came up with the idea of centering the activity around projects. Alanna then devised a clever game, in which players would think of any project they had worked on or were currently working on, have them categorize the project in two ways, and answer two questions about the project. Each category had four possible answers, and each answer was represented by a sticky note of a different color.

Alanna did two trial runs of the exercise. “There was a lot of logistical things. When to ask questions. When to have people buddy up. Figuring out the order of how to do it,” she says. For the first test, about 15 Exaptive employees were rounded up, lured in by free lunch and a love for exaptation. Participants were invited to hit a gong when their collaboration felt like it had reached an aha moment. The second test was during a Data + Creativity meetup. The crowd of about 20 came from mostly different companies. No aha moments developed during either trial.

The hypothesis behind a Cognitive City is this: if you take two scientists with the right amount of commonality, sit them together at a table (real or virtual) with a relevant project to talk about, they’ll be able to collaborate well based on both their shared experience and their unique perspectives. Alanna says they learned a lot based on the feedback from the participants in the first trials. “A lot of it was about phrasing. Making sure people understood the context. In the first run there was confusion of what project to choose. We clarified it to be something that you’re interested in working on, currently working on it, or a dead project that could be revived.”

Freeing participants from self-censorship seemed to be an obstacle as well. Some analysts noted the element of hitting the gong added a lot of pressure. Alanna continued, “Also take out time and money constraints. And we realized the goal couldn’t be to have people hit a gong when they reach their aha moment. The goal should be to keep people talking or interacting.”

The day of the Women In Tech presentation arrived. Exaptive Sales Team leader Claire Robison and Exaptive Administrator Shannan Callies organized piles of pens, Post-It®s, and player sheets on the audience tables. Dave started off talking about the difference between creativity and innovation. His message really resonated with this attendee:

Alanna jumped in to explain exaptation. “Birds evolved feathers for warmth, not for flight. You’re more likely to survive and have offspring if you can deal with colder temperatures. And also if you fall from a height, it helps if you’re light and fluffy.”

When it was time for the collaboration game, the crowd had the context they needed and made quick work of answering questions about and categorizing their projects. They were allotted a couple of minutes to find a collaboration partner who had one color in common. Then the coworkers were given about ten minutes to discuss the similarities and differences of their projects. 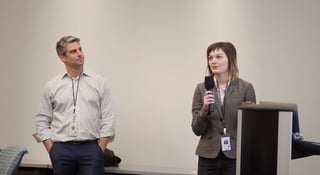 When time was up on the game, Dave and Alanna asked the crowd how it went. The first person to respond from the audience noted that she and her collaboration partner had each learned something they didn’t know about each other (everyone in the audience was an employee of American Fidelity) and that her partner had brought solutions to the challenge she was facing. She even made notes so she could act on his suggestions later. Dave gave a victory ring on the small bell brought in to recognize aha moments. (We did get a gong, but it didn’t sound as impressive as it looked, so we used a call bell instead.) 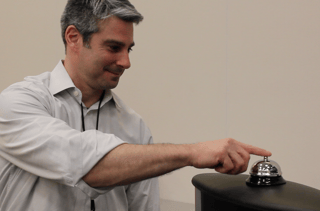 The second person to speak up had been part of a group of three. He said, “It was just interesting to me how we all kind of face similar challenges and duties in our jobs even though we’re in completely different departments. It helps to see how our functions all kind of fit together.” Ding, ding! We were overjoyed to see evidence supporting our hypothesis in real time.

After the event, I asked Alanna what was different about the Women In Tech game versus the two trials beforehand. “It seemed a lot more lively, which may have just been the number of people.” There were about 80-90 insurance analysts, actuaries, underwriters, and marketers in the crowd at the Women In Tech event. This also supports the need for a system to match experts for collaboration. As groups get larger and the potential teams made from a group increases exponentially, there needs to be a system in place to put the right researcher, analyst, scientist, etc. on the project. “People seemed a lot more excited, but that may be because they had chosen to be there, where at Exaptive we rallied workers together. At the meetup it was a group of people who weren’t connected at all. At American Fidelity they have common ground and are part of the same group, and I wonder if that affects it, too. And of course at American Fidelity we had people actually say, ‘Oh man, I learned something!’”

Bring On the Next Challenge

Now that the game explaining the concept of the Cognitive City has been worked out, Exaptive is excited to share it with more groups. Would Alanna change anything about the game? “Not immediately, but we’re talking about creating a digital version to allow for more attributes to make it more interesting. Changing what questions we ask about the projects. Maybe find more ways to make it more efficient. Of course, there’s only so much of that you can do before completely turning it into a real Cognitive City.”

Therein lies the beauty of Alanna’s clever game representing the Cognitive City. It simplifies the concept as much as possible, but not one bit more. Albert Einstein would be proud.

Innovating With the Team You've Got