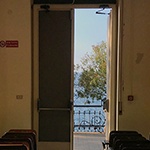 Reflected in the waters of Lake Garda, Italy, the Palazzo Feltrinelli stands as an example of architectural exaptation. Originally built as a home for a wealthy family in the late 1890s, it was exapted into Benito Mussolini’s headquarters during World War II, and then exapted later as a satellite branch of Milan’s public university, which it remains today.

Exaptation in Action: Understanding Disease from the Dark Side of the Moon

Dr. Sean Laverty spoke at the Data + Creativity Meetup, sharing how researchers have exapted an algorithm previously used to guide spacecraft in the Apollo moon missions to study the spread of deadly human pathogens. We broadcast the event on Facebook Live. Click here to watch.

Making It Easier to Have ‘Aha’ Moments

Serendipity is becoming an endangered species in our tech-driven world. Uber realized it could use cellphones and GPS to create an app that takes the luck out of catching a cab. Tinder uses the same tools to drastically stack the deck in favor of hooking up. So many other platforms are overriding luck to bring us what we want and need.